With the release of Opus 9, I wanted to revisit one of my favorite archetypes (Mono Lightning). At the very least, based on my initial impressions of two mono lightning cards in limited (Baknamy and Bahamut ZERO), I wanted to see if mono lightning received enough tools to be competitive in the current meta.

A few posts/articles have already been written about Bahamut ZERO and how powerful a card this can be in the right situations – especially in limited. Being able to conditionally kill a forward (e.g., forward needs to be active) like 7 CP Odin but cheaper is ok. However, the effect of dulling your opponent’s entire board is the bonus that is just asking to be exploited. The plays you can set up using this at the start of your opponent’s combat phase to kill one of their forwards and dulling all their potential attackers (as well as the following turn’s blockers during your next turn) helps with the aggressive/racing nature that mono lightning decks can have. As an extra bonus, I know I used to run Exodus just for the sake of killing Kam’lanaut after he selects lightning. However, if Kam’lanaut is not the only forward on the field now, mono lightning now has a way to get around the lightning protection by killing a different forward and dulling Kam. 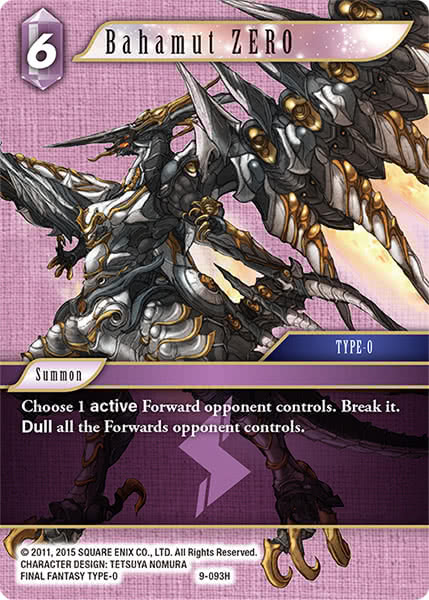 The other card, which seems like a great build around, is Baknamy. Being a standard unit (and is also searchable via Gramis as it is an XII character) means it’s possible that 2 (or even 3) copies can be on the board at the same time. 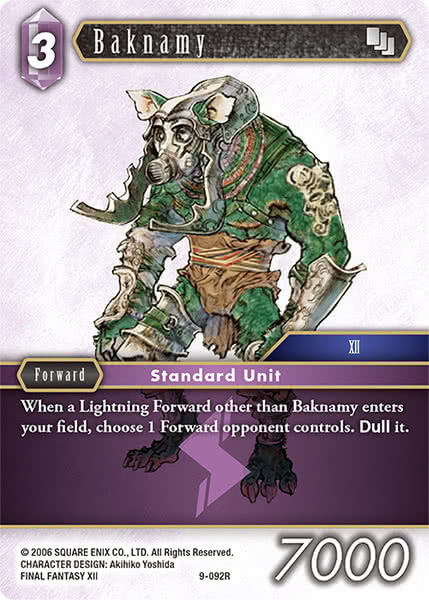 The effect of dulling an opposing forward whenever you play another lightning forward can get blockers out of the way. Even if the opponent is also able to go wide (e.g., Lenna/Knight or Leila/ Viking), multiple copies of Baknamy can easily dull the opposing board. Even with a single copy of Baknamy, his effect is still great when you play other lightning forwards who also dull a forward when they enter the field (effectively getting rid of more blockers). It goes without saying that playing a haste character with Baknamy can potentially let you get in damage immediately (so bonus points for Alba if you’re able to dull multiple forwards and get in immediately).

With these two cards in mind, I wanted to propose the following mono lightning list which Andy Carmona and I worked on:

The main focus of the list, with the 19 backups is to try and get to 3 backups ASAP. A lot of the deck’s plays are centered around 3CP so the deck wants to try and be efficient as possible with the resources (since the deck doesn’t have card draw that other decks may have). The deck does run Sage (1-133C) and Diana to provide some recursion for forwards.

Standout backups that have been included were the new lightning sage (9-090C) and Summoner (1-139C). Sage (9-090C) lets us pitch the early Bahamut Zeros as you typically don’t want to cast them early since they’re expensive and get them back later when we want to race/close out the game. Summoner (1-139C) lets the deck cast Bahamut Zero from hand by sending the backup to the break zone.

As I noted above, Gramis is used to search for Baknamy. Since your opponents’ forwards will most likely be dull (e.g., Baknamy’s effect), Al-Cid will not be a searchable target via Gramis as he’s not included in the list.

As for the forwards, the aim of the deck is to agro your opponent out with forwards that are 4CP or less to minimize the effect of Diabolos and Yiazmat. Many of the forwards in the list have haste allowing you to combo with Baknamy and get in damage as soon as possible.

With wind/water being a deck to watch out for (and to an extent Veritas), Hildibrand seems like he would be a great role-player. He’s generally too big to be removed via Fina+Valefor (especially if you are able to keep Nashu available) and will act as Famfrit and Veritas protection (as he returns to your hand via these effects). Also, again wind/water the haste allows you to get in damage before they are able to combo Fina + Valefor to wipe your board. Many of the forwards are able to survive even up to double Valefor on your turn so the deck should be able to get some damage in before being potentially wiped.

With the third wave of LQ happening in a few weeks, I’m definitely looking to see if there are other decks that are able to compete with Wind/Water. Let me know your thoughts on mono lightning and if Opus 9 provided any other interesting tools for the deck.

Check out TCG Titans for all your FFTCG Singles, Sleeves & Gear!

Don't forget to check out FFDecks as the hub for content creators and deck building!